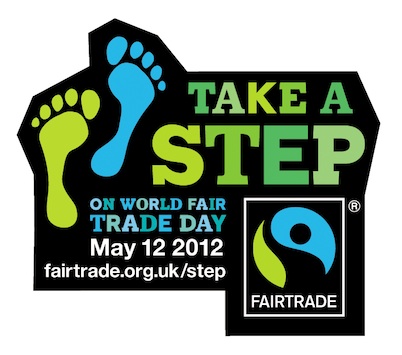 As part of the national Fairtrade Fortnight 2012 (27th February to 11th March), the Kensington & Chelsea Fairtrade Campaign is to host two stalls at Whole Foods on Kensington High Street in early March to help raise awareness of and promote Fairtrade in the Borough.

The two stalls will be held on Saturday 3rd and Saturday 10th March from 11am to 4pm and will feature samples of Fairtrade products and information about Fairtrade; you will also have the opportunity to sign up to the campaign.

This year’s Fairtrade theme is “Take A Step” which has the aim of getting 1.5 million steps in support of Fairtrade by the end of the year. More information about the national campaign can be found at step.fairtrade.org.uk. Despite the current tough economic climate, sales of Fairtrade products are ever increasing – in 2011, sales rose by 12% to reach around £1.32 billion, according to the Fairtrade Foundation.

The Kensington & Chelsea Fairtrade Campaign aims to encourage local businesses, community groups and shoppers to support ethical and fairly traded products. Although 22 of London’s 33 boroughs have been awarded Fairtrade status, our borough is unfortunately not one of them. In order to be awarded Fairtrade status, Kensington and Chelsea needs to undertake a number of steps, including establishing a campaign steering group with representatives of a range of community and business interests, winning Council support, and meeting five goals for awareness raising and availability of Fairtrade products and information

There are, however, a number of of businesses in Kensington & Chelsea that already offer Fairtrade products, including Whole Foods and Luscious Organic on Kensington High Street, Tea & Coffee Plant and Portobello Wholefoods on Portobello Road and the Oxfam shops in the area. The Cooperative, Sainsbury’s, Waitrose, Marks & Spencer, Pret a Manger, Starbucks, EAT and Crusssh also all support the campaign.

Support your the local Kensington & Chelsea campaign by coming down to Whole Foods on the 3rd or 10th March, and do also check out the campaign online at www.Facebook.com/fairtradekc and rbkcfairtrade.blogspot.com.