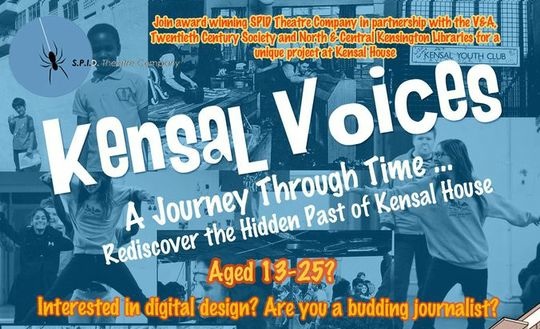 Young local residents may be very interested to hear about an exciting local community project that’s calling for participants to take part in taster sessions next week! Kensal Voices will see 20 young participants based in and around Kensal House take part in an exciting multimedia project that will focus on the heritage of this historic, Grade II* listed council estate, designed by Modernist architect Maxwell Fry in 1937.

Whilst working on Kensal Voices, participants will take part in a number of interesting stages, each of which will help them learn and develop particular techniques and skills, as well as working in conjunction with a number of organisations. These include analysing source materials and learning about researching and archiving whilst they attend workshops on modernist architecture and design run by the Victoria & Albert Museum, then creating a booklet about the estate’s history; being trained to create oral history testimonies and learning about interview techniques with the Oral History Society before conducting their own interviews with the older residents of the estate; and developing and conducting architectural tours of Kensal House, after undertaking their own tour with The 20th Century Society.

The final stage of Kensal Voices will allow participants to decide which material they would like to explore further – which they will then develop into an estate-based performance, that will be free for the public to attend. This final stage will see the participants forming their own company  and working alongside professionals to create the performance – offering them a sense of ownership of both the project and the heritage of their estate. 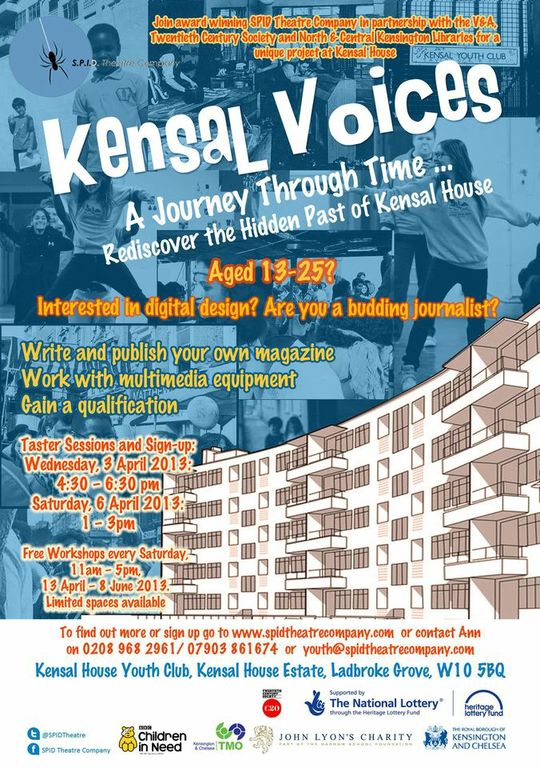 Kensal Voices has been started by the S.P.I.D. (Specially Produced Innovatively Direct) Theatre Group who are themselves based in the community rooms of Kensal House. They create adventurous and immersive theatrical work in non-traditional spaces, and their promenade performances in neglected community spaces have won prizes nationally. Helena Thompson founded S.P.I.D. in 1999 and has been working with director Rachel Grunwald since 2003, aiming to attract audiences, especially young ones, that are otherwise alienated by traditionally-staged theatre. In 2005, they based their Edinburgh Fringe show ‘Open House’ in the neglected community rooms of Kensal House, and it was then that children and young people from the estate asked to get involved – prompting the start of their youth theatre group. Only recently SPID members aged 5-25 won an award for ‘Best Animation’ for their short film ‘High Above The Sky’ at the First Light Awards at the Odeon in Leicester Square.

In the last seven years, the S.P.I.D. Theatre Company has done much to renovate its home in Kensal House, cleaning and renovating the community rooms that now house a fully equipped lighting and tech rig with state-of-the-art operating equipment. The company now curates the space as a ‘Community Hub’ for residents.

Taster sessions for Kensal Voices will be taking place on Wednesday 3rd April (4.30pm – 6.30pm) and on Saturday 6th April (1pm – 3pm) – you can also sign-up at either session. Free workshops will also be held every Saturday (11am – 5pm) from the 13th April to 5th June – limited spaces are available.