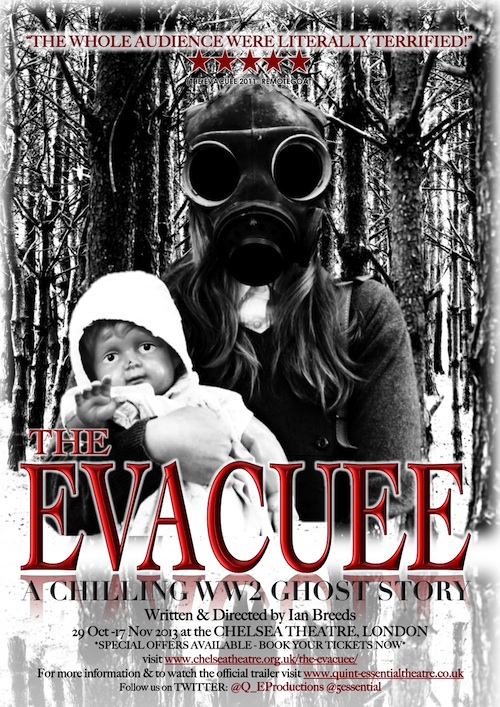 A World War II ghost story arrives on our doorstep later this month! Produced by the Quint-Essential Theatre Company, The Evacuee will run at the Chelsea Theatre on King’s Road from 29th October through to the 17th November 2013.

The play is set in the autumn of 1940, telling the tale of a girl who is evacuated from London and sent to live with a stranger. Janet Young hasn’t spoken a word since witnessing the death of her brother during the Blitz; arriving at the house of widower George Wilson, accompanied by her compassionate billeting officer Brenda, she’s upset, lonely and frightened. Janet is spooked by the eerie contents of her bedroom and goes straight to bed; over the next few days, the audiences sees all three of the main characters deeply affected by the stresses of the war. Unexplained events and strange goings on occur in the house too, and George’s dark and disturbing past is soon brought to light.

The Quint-Essential Theatre Company was founded in 2011 by Ian Breeds and Sarah Tyler Shaw, and they performed Dark Tales – a trio of short horror plays, their debut production – in the summer of that year. After a three week tour in London fringe theatres, they extended their run at The Lion & The Unicorn in Kentish Town because of such a high demand in ticket sales. The Evacuee was one part of Dark Tales, and has been adapted into a full length version because of the overwhelming response from audiences and critics alike.

In 2012, Ian wrote, directed and starred in the company’s first one man show, Mannequin, which was performed as part of the Crouch End Festival. Ian then also wrote an accompanying one woman show, The Tea Party, that played alongside Mannequin in a production called The Lost Souls. The Lost Souls was superbly received when it played at The London Horror Festival 2012, so much so that Quint-Essential were invited back for 2013!

Quint-Essential have also started creating short horror films in 2013 – their first production, The Child of Nantucks Lane is currently in production and due to be completed by the end of this year.

Chelsea Theatre is a contemporary performing space and community hub that is dedicated to commissioning, producing and presenting the freshest and most innovative artists. The venue will be transformed into a haunted 1940s country home for The Evacuee.

You can book tickets for The Evacuee at www.chelseatheatre.org.uk/the-evacuee – tickets cost £12 (£10 concessions). You can get 2-4-1 on tickets on 29th and 30th October, and a Halloween Special – with tickets priced at just £6.66 – will be offered for performances on 31st October.

Furthermore, on 9th November there will be a special “1940s evening” performance where the audience are encouraged to dress up in WWII-era costumes and join the cast and crew for a drink after the show.

On Sunday 10th November – Remembrance Day – £1 from every ticket sold for that day’s show will be donated to The Royal British Legion’s Poppy Appeal.